Arranged from the most recent at the top to the beginning at the bottom. Some additional recent examples of riding may be seen on the clothing page. For a more extensive account of my riding history go to Levantia. 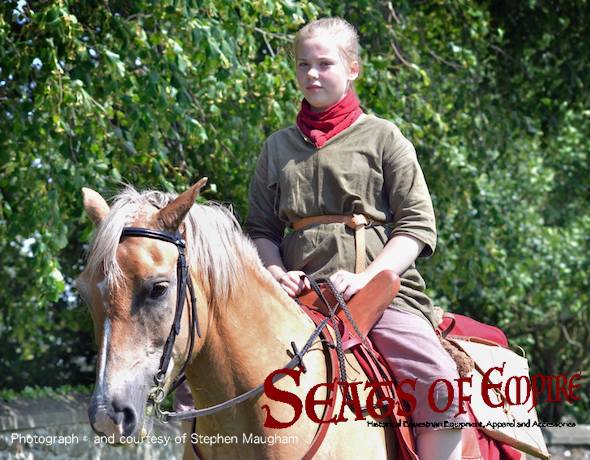 The Roman saddle shown on the Ancient page in use. Go to the Ribchester Roman Festival 2017 page for more pictures. 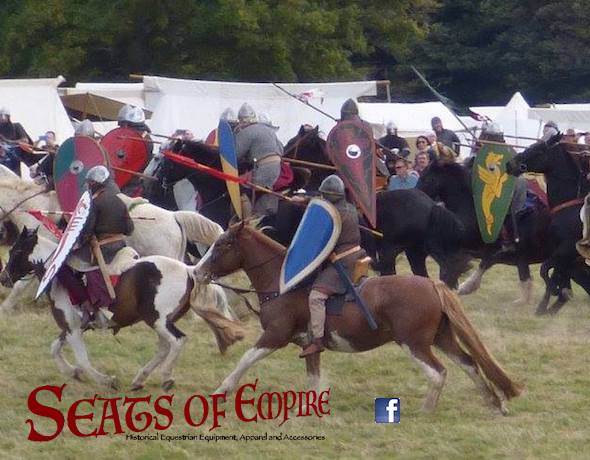 On the field in the Battle of Hastings re-enactment, 2016. Here I field-test the new scratch-built Norman saddle shown on the medieval saddles page. 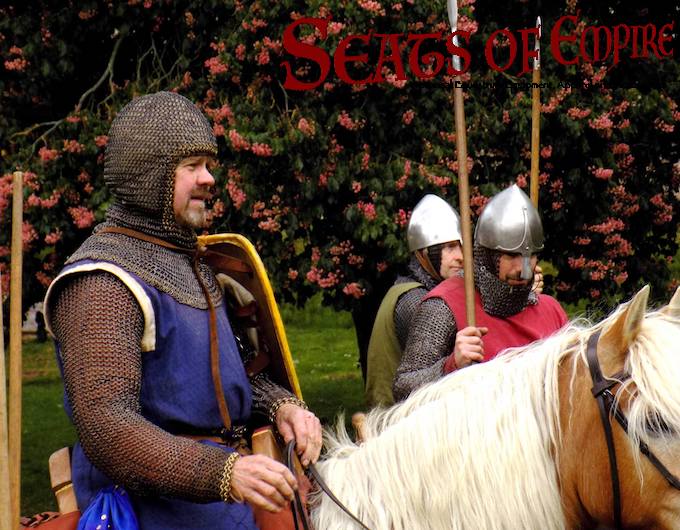 On the 800th anniversary of the Battle of Lincoln Fair in May 2017, Nigel Amos kindly invited me to assist the Conroi’ riding his sweet-natured Haflinger, Magyar. 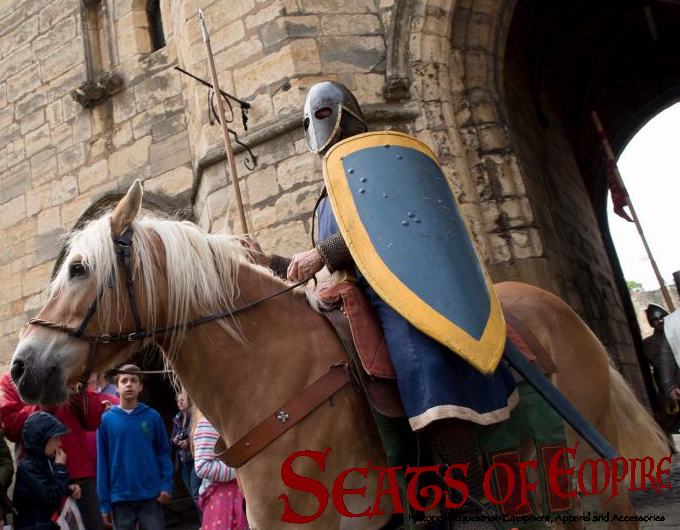 The distance from Lincoln Castle to the cathedral is very short, but riding it as part of the Battle of Lincoln Fair pageant was never-the-less a great experience. 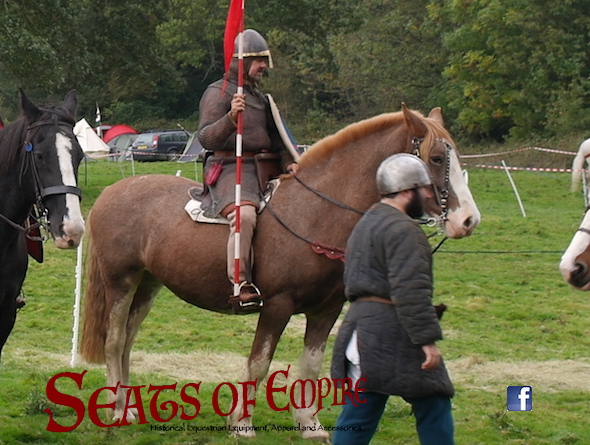 Waiting for the start of the Battle of Hastings re-enactment, 2015. This was the last time I used the UP conversion Norman saddle shown on the introduction page. 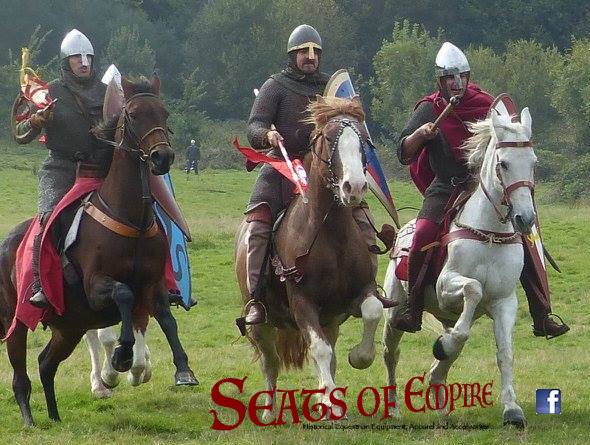 On the field in the Battle of Hastings re-enactment, 2015. 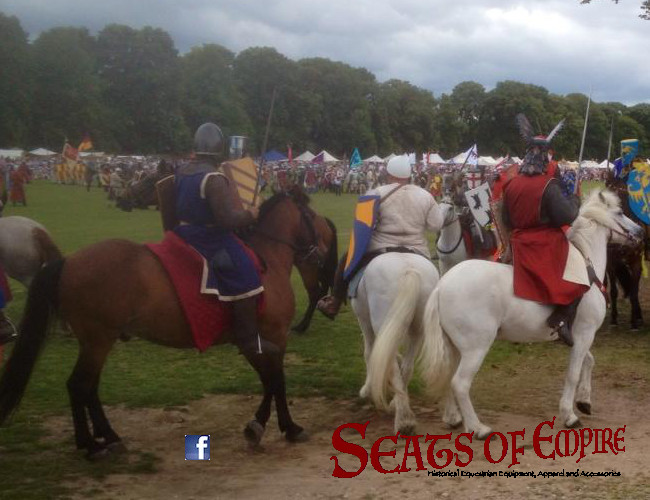 The Battle of Evesham re-enactment of 2015 was the largest medieval cavalry event since the great Hastings of 2006, and a fine event all round. 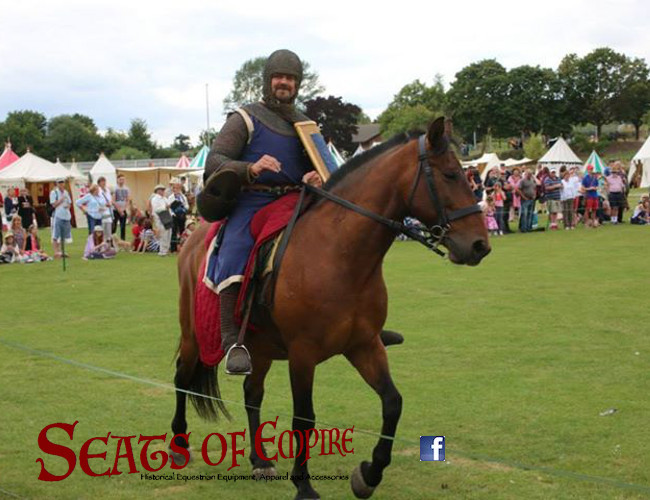 I was not able to use my own saddlery at the Battle of Evesham re-enactment, but I am quite proud of how accurate and funcional my own panoply is for riding in this period. 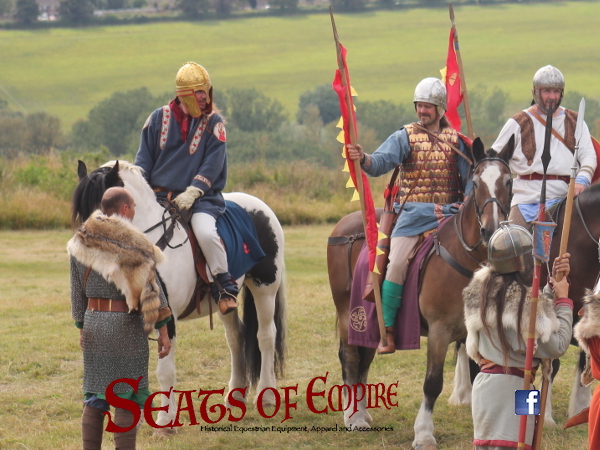 In 2014 I (centre) was drawn into the party doing cavalry at English Heritage’s “Battle of Legend” at Old Sarum. The event and preparations were filmed for the “Weekend Warriors” programme of the same name. This picture (and the one in the page background) was taken by John Doran, whose excellent spread for the event may be found on Flikr. 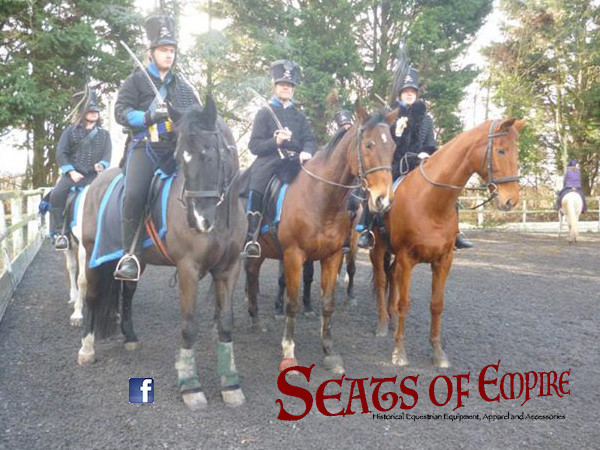 As the Waterloo Bicentenary Bandwagon got into gear in 2013, I (centre) briefly flirted with becoming a hussar with the Brunswick Battalion, but I could not get enthused about the period. 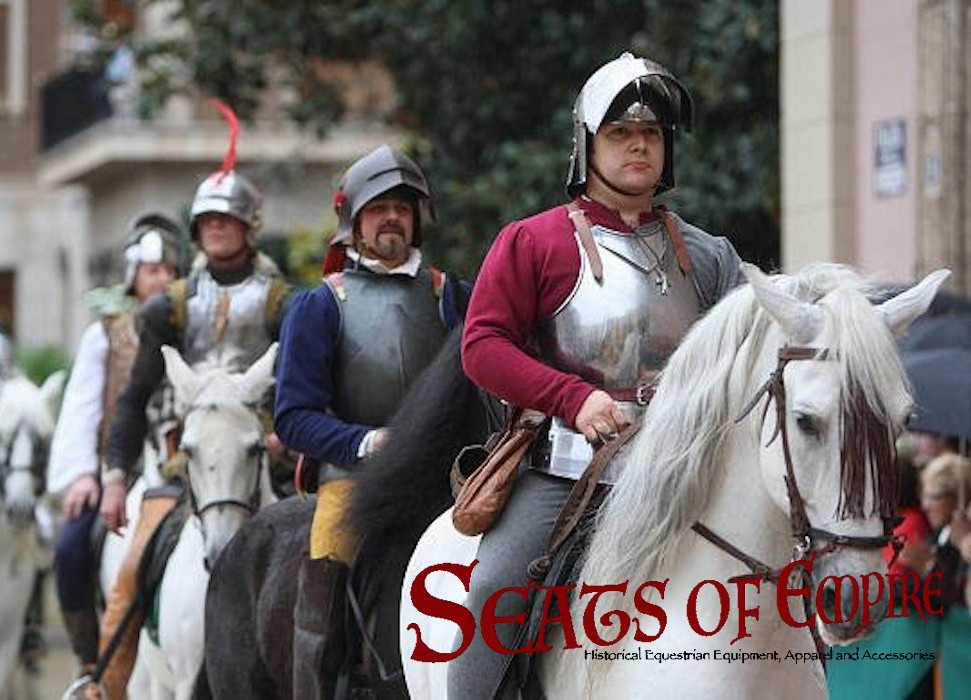 In 2008 I (centre) was fortunate to be one of the party taken to Valencia by Grffin Historical to commemmorate the triumph of King Jaime I. 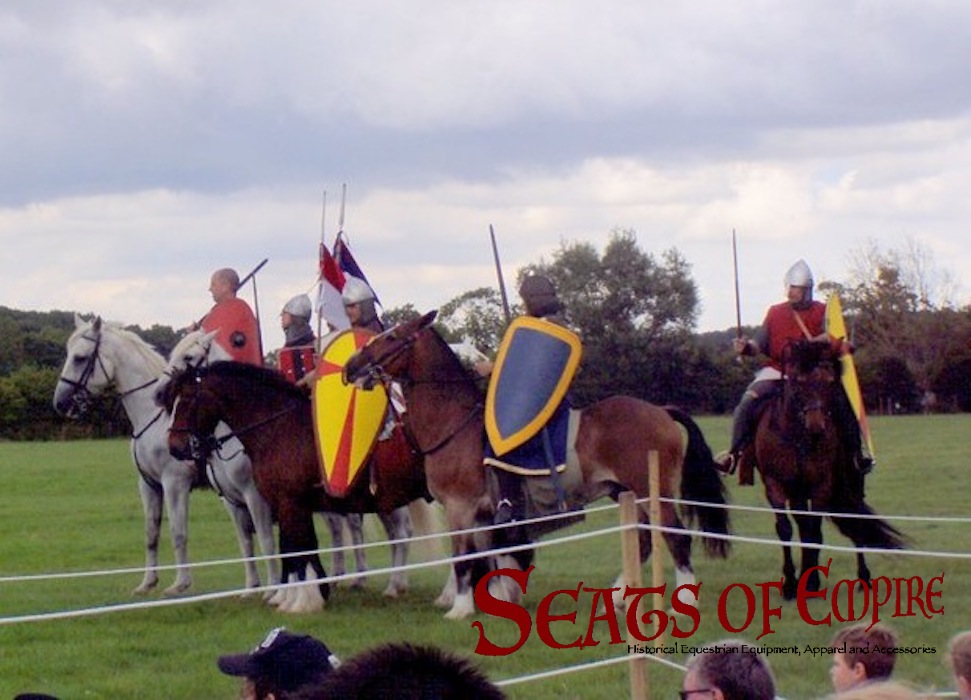 Waiting for the start of battle with the Conroi. (The blue shield is me.) Festival of History, 2006.

No, there was not a twenty year gap in my riding, just in the good photographs to hand! 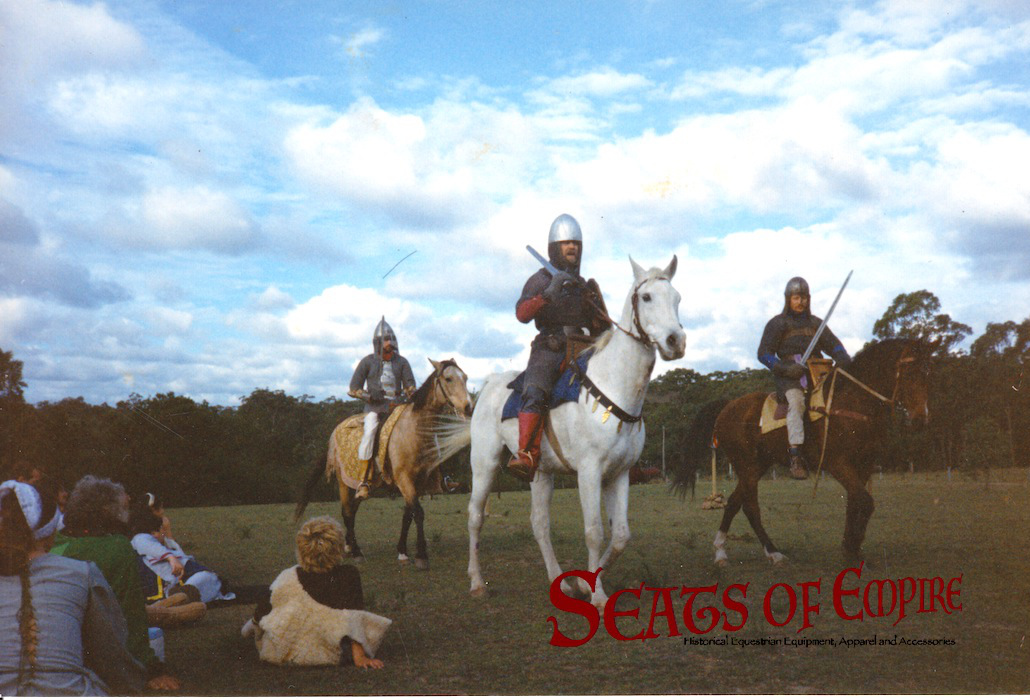 Introducing the Rowany Festival display, 1987. From left: Sean McBride on Sojo, me on Beau, Steve Nicol on Helena. 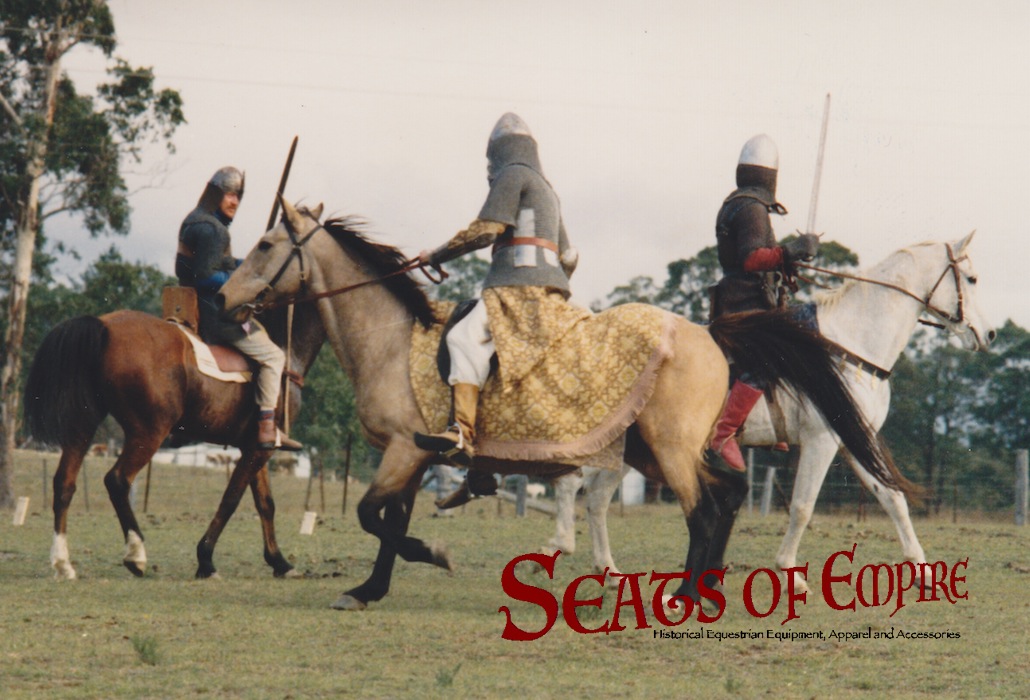 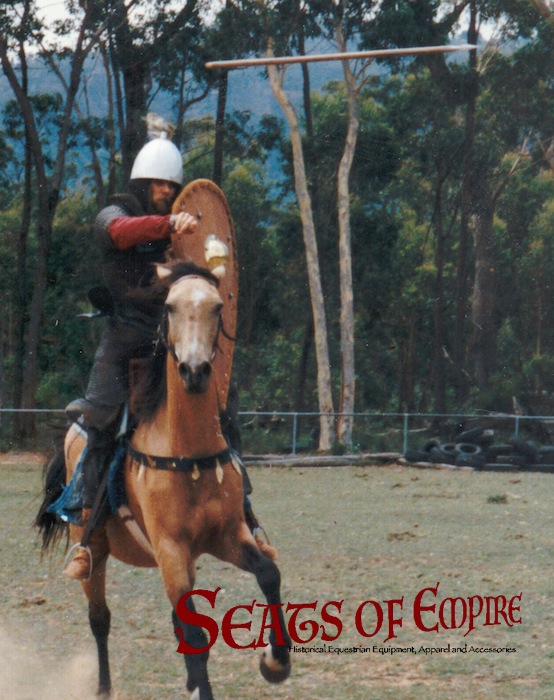 From a show staged by “Living History” (my professional display company) in 1985. Riding in my second scratch-built Norman saddle on Sojo, whose polocrosse training made him the ultimate warhorse. 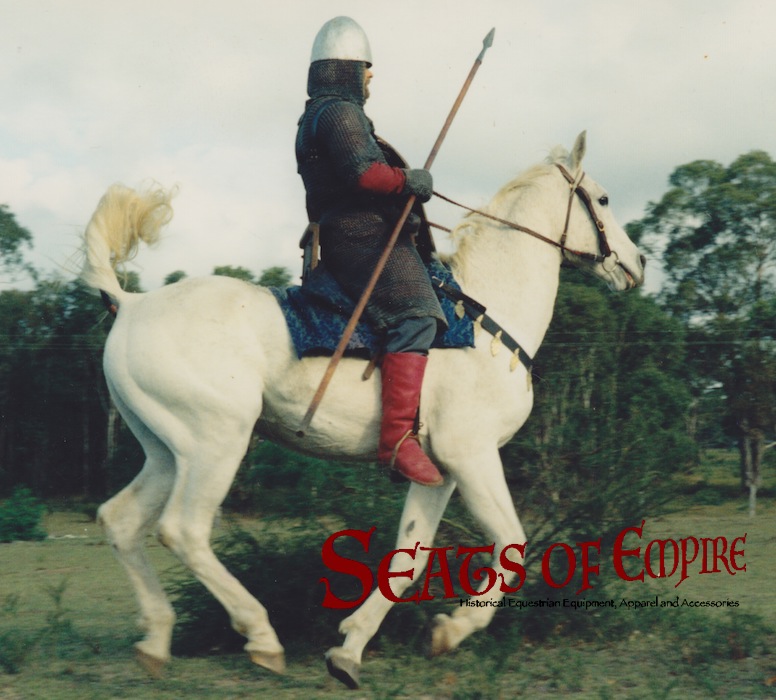